So Tim Levins has been absolutely rocking the Instagram recently. And a few days ago, he started posting some pages from Gotham Adventures #24, showing both his pencils and the final colored and lettered page.

A question followed about the shot description for one of those pages. I've kept most of my scripts over the years, so I was able to pull up that particular page and was very surprised by what I found. Since the first comic book scripts I ever read were by Alan Moore, I just assumed his way of writing shot descriptions was the norm. To put it mildly, it is not. Most writers give far less detail in their shot descriptions and many excellent writers are nearly spartan when it comes to what they request.

So I was interested and pleased to discover just how quickly in our working relationship I started simply turning things over to Tim, trusting in his artistic vision. 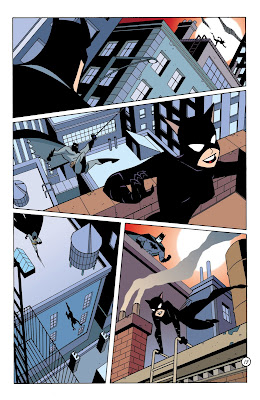 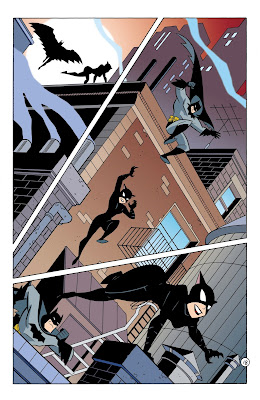 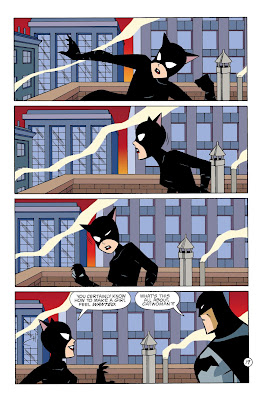 And here's my script for this sequence:

Page Seventeen
Panel One
Upshot from behind and below Batman. He’s in the EFG on the rear of the truck looking up at the buildings overlooking the truck where he can see Catwoman’s silhouette running away in EBG.

Panel Two
Reverse angle, so we’re looking down past Catwoman in the EFG. Behind and below her we can see Batman swinging on his line, on his way up to us.

Panel Three
And the chase is on. Okay, Tim, you said you’d like lots and lots of rooftops and whatnot, so that’s what you’ve got here. In fact, if you have no objections, I’m going to let you take it away. Here’s where we end up: She’s on the edge of a building that’s at least five or six stories high (you can go higher if you want), that has only taller buildings nearby, and her building can’t have any fire escapes or other ways down. She’s got her back to the street and is facing Batman, who’s about five feet away and is holding his batarang/line. I have no idea how they get there.
Have I ever told you my philosophy on the Adventures books? I could go on for hours, but you can boil it down to a few points. One of the things that sets them apart is this: they are a comic based on an animated show based on a comic. They are not simply kiddie versions of the regular books, though it is absolutely integral that they be accessible to children.

Page Eighteen
Panel One
To that end, the storytelling must always be crystal clear and interesting and exciting. Now, animation has the obvious benefits of being able to move the camera and add sound effects and music and voices and all that. We can’t do that, so we have to rely on clear stories (which, hopefully, have an interesting twist and/or plenty of heart and some humour) with excellent and arresting art.

Panel Two
In order to simulate the pace at which the animated show goes--one of its strong points--we restrict ourselves to no more than four panels per page (making the rare exception for effect), and sometimes fewer, we always open on a splash and so on. Big exciting images. Although it would seem to be the opposite, it actually makes the book much more challenging and difficult, a fact which escapes many (though never you, Tim).

Panel Three
So, with that in mind...have fun. If you’d rather I paced it out, I’d be happy to, but since you wanted to draw Catwoman in the first place, I give you freedom. Fly, be free.
Panel Four(?)


BATMAN: What’s this all about, Catwoman?

First off, I'd like to express admiration for how great the final version of this entire sequence is, but especially how clever and effective the layout of that middle page is. I'd like to, but I'm not a good enough writer.

But it's that last page that really struck me. Because it's not only one of my favorites, but a storytelling concept I've used several other times—where the character does a hesitant stutter-step, trying to decide which way to go, while the camera's locked off all the while for maximum clarity and humorous effect. And I am astonished to discover that I apparently stole it all from Tim. Oh, well: as they say, steal from the best.
Posted on Saturday, September 28, 2019