So I've got a new webcomic. 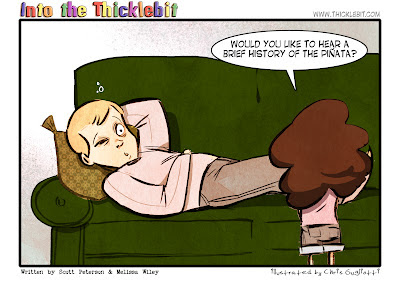 My faithful webpixie and I have been talking about doing a webcomic for some time. The idea appealed greatly but there was the small problem of neither of us being able to draw. Well, that's not entirely true: my lovely and talented webpixie can draw a giraffe like no one's business, and her alligator ain't too shabby neither. But given that we were hoping our strip would focus on family life, those two characters didn't seem as though they were likely to quite be enough to entirely fulfill our artistic needs.

The first time I saw one Christopher Aloysius Rizwan Weeping Deer Gugliotti, he was being very gently manhandled into the back of a state trooper's Ford. As Googs, to use the Māori's preferred name for him, ranted serenely about aliens and the federal reserve I knew as sure as eggs is eggs that one day he would draw either an insanely ultraviolent Wolverine graphic novel my good lady wife would write or her epic fantasy series featuring Laverne & Shirley.

Neither of those has come to pass. (Yet.) But in the meantime, we've got Into the Thicklebit, cowritten by the aforementioned Melissa Wiley and myself and illustrated by the impossibly talented Chris Gugliotti.

So check it out. Four out of seven cardiologists—and this is true—recommend Into the Thicklebit, as it keeps pulmonary embolisms away. (Give or take four cardiologists.)