There are worse questions to be asked.

The person doing the asking was Shannon Eric Denton, jack-of-all-trades and man-about-town, one of those guys who seems to know and be known by everyone in the comic book industry, and a healthy dose of the animation industry. Shannon's done it all: been a writer, a comic book artist, a storyboard artist, designer, editor, publisher, long jumper, particle physicist and bassoon player.

In this case, Shannon was asking as the publisher of Actionopolis. It seems he and James A. Owen had been discussing a concept for a YA series, but James—author of the wildly popular Chronicles of the Imaginarium Geographica books—was too busy to actually write it and would I like a crack at it?

I would. Although I've never met James, he's long been one of my daughter's favorite authors, and the concept was highly intriguing. Playing off the idea of the treachery and subsequent bloodshed so often involved when it comes to the royal line of succession, James wondered:


What if it's the reigning most powerful superhero on the planet who dies, and on his death, the power flows to his heir, the eldest of his non-powered sons?

And what if the hero was murdered?

And the obvious question of a murder like that is "Who Benefits?" which is obviously the eldest son, who should have inherited the power—but doesn't.

Instead, the youngest brother does—and it becomes clear to the rest of them that the rules have changed: it's no longer a succession of eldest to youngest...any of them could inherit the power.

Are you kidding me? You had me at the reigning most powerful superhero on the planet dies, and on his death, the power flows to his heir.

The high concept James sent was brief—although quite a bit more than that small excerpt—and yet there was already so much there, so much to play with, such wonderful grist for the mill: it was perfect. I spent a few weeks—okay, a few months—world-building, coming up with a bible of sorts, almost none of which made it into the actual novel. I then had to clear a lot of other stuff off my plate before I could dive into the actual writing, but once I did, the story just poured out.

A bit of back and forth later—there are few things more satisfying and (generally) enjoyable than really digging into a story, twisting and turning it, poking and prodding it to make sure it works—and we had ourselves Inheritance: Long Live the Zar. It deals with the difficulties of parent-child relationships, sibling love and rivalry, loss, adolescence, young love, and the problems of learning how to use brand-new superpowers: you know, the usual stuff.

It's also got an insanely gorgeous cover by the impossibly great Fiona Staples and it's currently available for the extremely user-friendly price of ninety-nine cents. 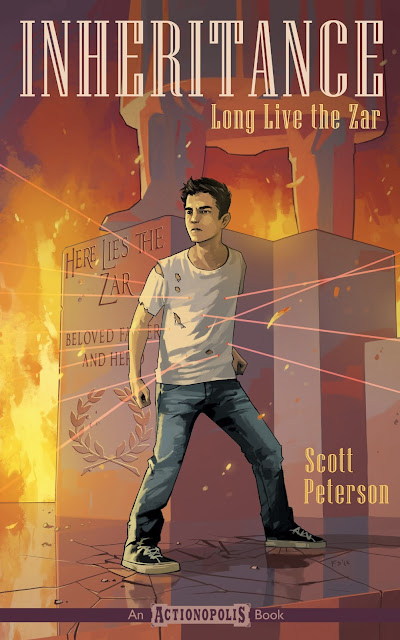 Living in the world of the Zar for a while was intoxicating and coming up out of it a bit disorienting. I've been wanting to dive back in for a while, and have had dozens of ideas floating around, but just yesternight I was suddenly hit by an entirely new one, wondering what would happen if...

...but that's for another time. Meanwhile, go check out Inheritance: Long Live the Zar and let me know what you think.

Email ThisBlogThis!Share to TwitterShare to FacebookShare to Pinterest
Labels: Inheritance, James A Owen, novels, stuff I wrote, the Zar, YA fiction