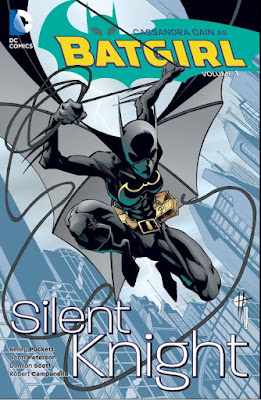 Well, this is quite nice:

Way back when, after Gotham City was devastated in a massive earthquake (see Batman: Cataclysm and Batman: No Man’s Land in 2000) it was written off and abandoned by the US government in a spookily prescient foretaste of what would happen to New Orleans after Hurricane Katrina hit in August 2005. Amidst the rubble, a number of heroes struggled to protect the innocent. One of these was a brand-new incarnation of Batgirl.

As the crisis ended and a semblance of normality returned to the battered metropolis, the new heroine got her own series and a mentor in the form of Babs Gordon, the wheelchair-bound crime-fighter called Oracle, who was also the first Batgirl.

The new operative is an enigmatic problem. Raised in utter isolation as an experiment by martial arts super-assassin David Cain, she cannot communicate. Part of the process creating Cassandra Cain was depriving and overriding her language centres in an effort to make combat her only communication tool. An apparent runaway, she was briefly adopted by the Batman as another weapon in his never-ending battle, before the more humane Oracle becomes her guardian and teacher.

In this first paperback/digital volume – spanning April 2000-March 2001 by collecting #1-12 of the monthly series and first Annual – the new Batgirl is trying to find her way, bereft even of the ability to learn, whilst revelling in the role of defender of the helpless, but her development as a human being threatens to diminish her capacity as a weapon, and the mystery of her past would indicate that she is possibly a two-edged sword in Batman’s arsenal…

In a bold experiment, initiating writers Scott Peterson and Kelly Puckett eschewed the standard format of individually titled stories to craft a continuous string of high action, deeply moving episodes which saw the neophyte street warrior battle the dregs of Gotham City while attempting to adapt to a life where not every person was her enemy. Fast, furious, frenetic, visually expressive incidents (illustrated by Damion Scott with inkers Robert Campanella & Coy Turnbull) are interspersed with flashbacks to her lethal and cruel formative years with Cain pitting her against assassins and worse, while keeping a stunning secret of her natal origins all for himself…

Spellbinding, overwhelmingly fast-paced and terse to the point of bombastic brevity, this is a breakneck, supercharged thrill-ride of non-stop action that still manages to be heavily plot-based with genuine empathy and emotional impact. Truly superb comic storytelling which should be on every fan’s wish-list or bookshelf.