When I became Dennis O'Neil's assistant editor in 1991 (I think), I was given many responsibilities—one of which was to send a copy of The Batbible out to any creators working for us on Batman for the first time.

Denny had first written the Batbible sometime in the late 80's—it says 1989, which is the year the Michael Keaton/Jack Nicholson/Tim Burton film came out, but it's possible he wrote a draft earlier. It definitely includes the script for "The Man Who Falls," the fantastically concise and powerful origin story Denny and Dick Giordano created for a special trade paperback Secret Origins collection DC put out shortly after the Batman movie took the world by storm, collecting otherwise previously published origins for the likes of Superman, Wonder Woman, Flash, Green Lantern and the Martian Manhunter.

The Batbible was updated sporadically afterward, at least during the seven largely magical years I spent working with Denny. It went from being a much-photocopied document to being copied to a floppy disc to being copied to an in-office Mac to finally, presumably, being emailed, in the days when that was still somewhat new and hi-tech. It usually had a whole lot of artwork attached, including a set of drawings of things like the Batcave and Wayne Manor that Graham Nolan had drawn for us.

In 2012, 14 years after I'd officially stopped working with Denny and a full 19 years after I was no longer actually his assistant, Denny emailed me to ask me if I had a copy of the Batbible I could send to him.

Of course I did. The number of irreplaceable items I'd lost track of since those amazing days of helping helm Batman do not bear thinking of. But the Batbible? Of course I had a copy of that. Sure, it was a half dozen iterations of operatating systems out of date, but I still had the raw data. And, sure, it took me a few hours of work to be able to extract it from those old old oh so old versions of software, but what, I'm going to not keep track of the official writing of What Is and Is Not Batman by the great Dennis O'Neil? I don't think so.

So. Herewith I present to you (most of) the mid to late 1990s edition of The Batbible by Dennis O'Neil. I've nixed some of the characters, since some of them—the mayor of Gotham (Krol), for instance—proved somewhat ephemeral and I have to pay extra if I go over the character count.

There are nine and sixty ways

To sing the tribal lays

And all of them are right.

He's had a number of personalities in his fifty years of existence. He's been a grim avenger; a swashbuckling fantasy adventurer; a cheery solid citizen; a Sherlockian ratiocinator; and on television, a self-mocking comedian. Because he has inhabited that vast, unboundaried mirror-world known as Popular Culture, where realities shift from day to day and change is the only constant, the Batman has had to remake himself every decade or so or risk almost certain extinction. He has survived and, in the mirror-world, that is an achievement.

I'd like to think that, despite the many guises he has assumed in the past five decades, there has been one constant: his soul. Now, when we're discussing a fictional character, "soul" doesn't mean quite what it means when we're discussing your next door neighbor. (You and your neighbor, and Father O'Malley, and Rabbi Goldberg, and Lao Tse, and Zoraster and Martin Luther and Mohammed would probably also disagree about the exact definition of the word, whether applied to real or unreal people, but that's irrelevant.) Let's agree that in this context "soul" means whatever prompted the creation of the character. A Jungian, or a student of mythology, might argue that our hero is an archetype--an idea or image that's part of everyone's psyche--and I'm not sure I'd disagree. If that's the case, he wasn't created so much as discovered, and then adapted to fit the needs of the moment. Mythologists tell us that's how it usually works.

But if he is an archetype, he should have had earlier incarnations. Other denizens of the mirror would certainly do. Superman is a modern version Gilgamesh, Hawkman is Dedalus, The Flash is Apollo, The Hulk is Hercules--it could be a pleasant rainy day diversion for a trivia freak with a scholarly bent to complete the list. But if we look for earlier versions of our man, we find little or nothing that can be labeled "hero." We're successful if we search for him among the villains: the demons, the bloodsuckers, the were-creatures, all the dwellers of dark places, all those who shun the light. Look at Dracula, squint a bit, and you see The Batman.

This is a good guy?

Well, yes. He has that half-century's continuous publication to prove it. But I wonder about how the metamorphosis worked, exactly. What changed the dark-dweller from monstrosity to savior, and why has he remained popular for so long?

Start with this: The Batman is nothing if not urban. So maybe the answer is in how people came to regard cities. Once, cities were heavens: bulwarks against wild beasts, savages, all the manifestations of a cruel and capricious nature. But by Dickens' time, cities were recognized as themselves cradles of evil. The devil doesn't live in a bog miles from civilization; the devil lives upstairs. The devil is Rosemary's Baby. That being so, where is a citizen safe? Certainly not in New York, nor in New York's mirror-world counterpart, Gotham. I've long believed that Batman's Gotham City is in Manhattan below Fourteenth Street at eleven minutes past midnight on the coldest night in November. Take a walk. What is that in the doorway? The man in the black jacket, the one crossing the street there--is he wearing something over his face? Why is he running? And--oh my god-- he's coming this way. Now imagine this: the runner speeds past you and strikes down the person in the doorway, who is your worst enemy, who is insane, who has an ax. The runner is Batman. What I'm suggesting is that we have coopted the grimmer archetypes, embraced them, declared them, with all their ferocity and relentlessness and inhuman competence, our allies. One of the names we call them is Batman.

Why? Well, it's been a pretty rough century, and it's probably getting rougher. It might be easier to coopt a devil than to believe in an angel.

Of course, we're not glum all the time. We don't always want to be shaking hands with the devil. Optimism and pessimism seem to be cyclic. The reason Batman survived and other saturnine worthies--particularly his immediate forerunner, The Shadow--did not may be the adaptability I mentioned earlier. If the decade favors the Protestant Virtues--citizenship, family, patriotism, good old church-going American Decency--our man becomes the Batman of the Fifties. If the decade is questioning such virtues, our man caricatures them as did the Sixties Batman. The secret of this adaptability is simple: many different artists and writers and editors have worked on the Batman. Although he was created by Bob Kane and Bill Finger, dozens of later craftsmen, including me, produced his stories. We were all reacting to the moment, to whatever was shaping our lives at the time, and the lives of our editors and publishers and readers, and our reactions in turn shaped him.

Which is not to say the stories bear no individual stamp; they do. Writers like Steve Englehart and Doug Moench have given us a normal, healthy Batman with a romantic streak. Others, such as Frank Miller and Jim Starlin, have presented Batman as a tormented obsessive. There hasn't been much latitude in the graphic representatives--he's always had the bat silhouette, the flowing cape and the dark colors--but the Batman has certainly looked different from decade to decade. Neal Adams' approach is generally considered the best--some say definitive. Neal's rendering is basically realistic. He once told me, "If Batman existed, he'd have to look the way I draw him." But it is heightened realism or, to borrow a term from German painters and Latin American novelists, "magic realism." In Neal's work, people and things are recognizable, but idealized and subtly exaggerated, given a unique drama and purity. It is a style particularly appropriate to a character who, while a superhero, is not superhuman: who manifests both an ideal of human perfectibility and a reflection of human terror.

Having said all that, I must reiterate that the character as a whole is a consensus. No one individual guided the Batman, and so he could not be the victim of one individuals getting old, cranky, isolated, out of touch. That maybe antithetical to great art, but it is almost a condition of folklore--a myth is a story that generations have agreed on--and any character who's been visible for fifty years in virtually every medium has to be a folk hero. He's been molded by too many disparate things not to be.

Back to matter of his soul. Can a composite even have a soul? Sure. The Batman archetype is the creature of darkness who serves the common good, the devil on an angel's mission; that's the image always at the center of the stories. It is what individual artists and writers react to, either embrace or deny, or even lampoon, but can never totally ignore. Unless the humanity has a sudden, unprecedented attack of sanity, and we need no longer fear the darkness, it will probably keep him popular for at least another fifty years.

Happy birthday, Denny. Thank you for...well, other than my wife and children, pretty much everything good in my life. 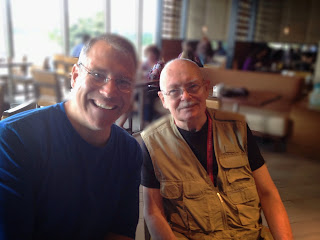