Hm? What's that? Have I been working on a Stan Lee comic book recently? Why, as a matter of fact, I have! 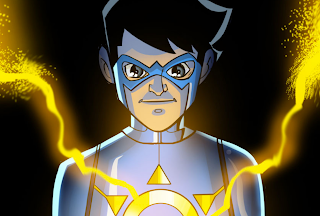 Did you hit your favorite comic book shop for Free Comic Book Day? If so, then you probably saw what I've been working on for Graphic India:


“Chakra – The Invincible” is the first superhero for India created by comic book legend Stan Lee (co-creator of Spider-Man, X-Men, Iron Man, Hulk and The Avengers). Chakra tells the story of the young Indian teenager, Raju Rai, a technological genius living in Mumbai. Determined to use science to unlock the secrets of human potential, Raju develops a technically-enhanced suit that activates the mystical Chakras of the body, unleashing newfound abilities and powers.

We're introducing Raju in a standalone story illustrated by Jeevan Kang, an amazing artist. If you haven't been to your local comic store today, what are you waiting for? Go get it—you can't possibly beat the price!
Posted on Saturday, May 04, 2013