If you're lucky enough to get to work on one of the most famous characters ever, you'll get asked occasionally if it's hard to make the character yours.

The answer is that I think every creator has a vision for what constitutes "their Batman." Maybe it's the lighthearted guy who carries Batshark Repellent. Or maybe it's an obsessed vigilante who's only barely able to keep from killing the criminals he's stopping. Maybe it's more on the detective side of the ledger, or maybe more on the superheroic—the urban legend loner or the leader of the Justice League. Maybe even tending towards the supernatural, as some have liked to go, or the more sci-fi take on the gadgets. Or some combination of all of the above.

So my Batman? I've always said it was a cross between Chuck Dixon's and Kelley Puckett's—interestingly, two writers who are fairly dissimilar in their approach to the medium, but whose Batman, perhaps more than any other writers', tends towards the silent. I think I prefer to go in a slightly more literary, less pulpy direction than Chuck, and a more straightforward, less intellectual, metaphorical direction than Kelley.

But then I was rereading, for the first time in many, many years, Batman #431, by the amazing creative team of Jim Owsley and Jim Aparo. A team which only actually did, if I recall correctly, two issues together. The notorious Death of Robin storyline had just wrapped, and its writer—Jim Starlin, and what was with all the Jims back then?—only wrote one more issue after its conclusion before moving on. Jim Owsley stepped in for a pair of issues, then John Byrne wrote a storyarc—which included an amazing almost 100% silent issue—before new regular writer Marv Wolfman took over.

So Jim Owsley—now known as Christopher Priest—and Jim Aparo only got to do two issues together. But what issues they are, especially their first. And rereading it just a few days ago, I realized, oh...this. This is my Batman.

I mean, just check out this sequence. I love everything about it. 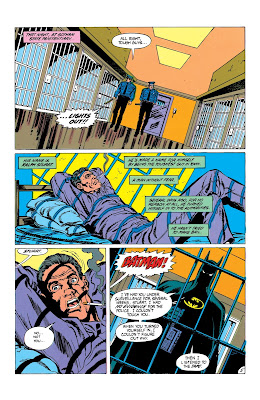 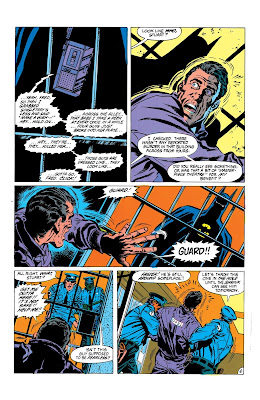 How menacing, how tough, does the Batman look in that third panel? When people complain about the yellow oval, I think of how awesome is it when used correctly. 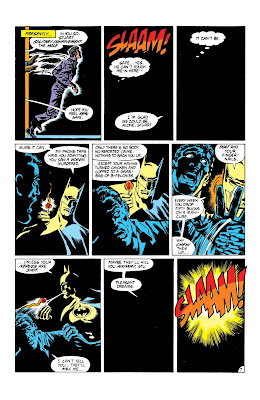 I mean. How badass is that? That second panel is so damn cool. But then that fourth panel is cooler still. He's so smart, so capable, that he can accurately predict what the terrified dude is thinking. Not to mention, how'd he get in and out of solitary like that? He's so cool. 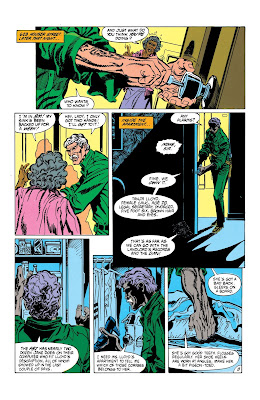 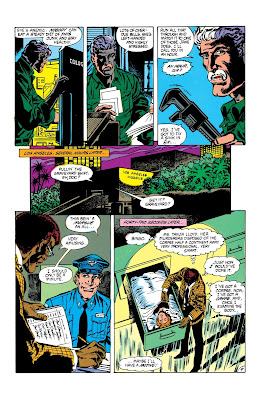 See? See? See what I mean? His detective skills are a thing of majesty. But that's not all. Not even close. No, after noting things like the state of her teeth and her gait, he then fixes the old lady's sink.

But that's not all! He's still not done: he goes to the morgue and is able to successfully impersonate a doctor, because of course he's got advanced knowledge of causes of death and their physical signs, and probably really could hack working as a medical examiner no sweat. Which I just thought was the more awesome thing I'd ever seen—and considering I'd seen the previous pages, is saying something.

The Batman, being the Batman, finds himself at odds with a legendarily deadly group of assassins known as, not coincidentally, The League of Assassins. 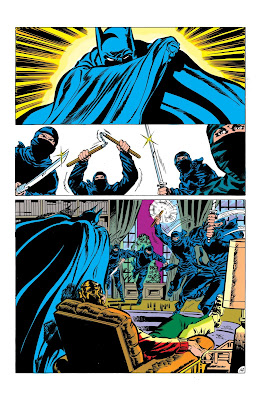 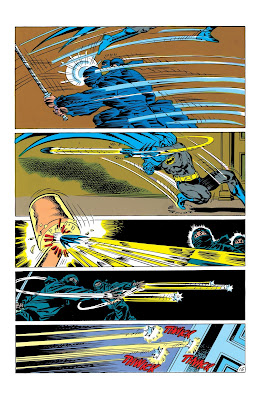 They charge. He jumps over them. The moment he lands, he's already whipping a batarang behind him. But not at them—at the lamp. His aim, of course, is perfect, because he's the damn Batman. They're no slouches themselves—they whip shurikens at him. But by the time they find their mark, he's already gone.

Now it's a hunt. Predator and prey. Four against one.

They, of course, are doomed. 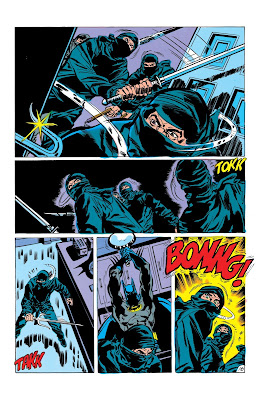 The Batman. Takes out a master assassin. Using a frying pan.

And looking absolutely fabulous doing so, may I say. Seriously, that shot of him lifting the pan is one of my favorite Aparo drawings—and considering how much I love Jim Aparo's Batman... 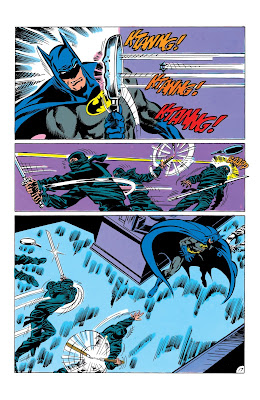 He knows the others will have been alerted by the sound of a frying pan concussing their fellow assassin, so he's already got it raised, ready to shield him from the shurikens they're going to be sending his way. Then he uses the pan to take out another assassin. Because he's the damn Batman.

We skip a page now, because fair use only goes so far, but the Batman takes out a third assassin, for he is the damn Batman. Meaning it's just the dark knight and one final killer. Our hero discards his cape because he is a matador taunting the bull and because he looks so cool that way. 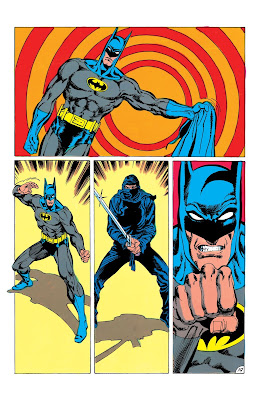 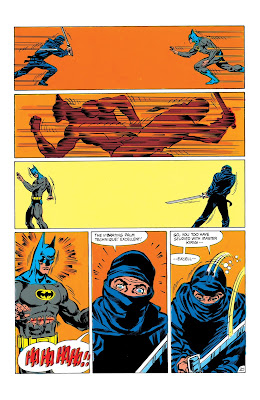 How great is Aparo's storytelling on this page? The first three panels not only anticipate the widescreen trend of the early Aughts, they're practically Asian in style—as is not inappropriate for the material. Then the three final panels, all in one tier. We are shocked to realize the Batman has been wounded. The assassin laughs. But not, we discover, because he believes he's killed the dark knight, but in admiration, as he realizes that the Batman has instead taken him out, using the most arcane of fighting techniques. Which only a small handful (no pun intended) of people know. One of which, of course, is the Batman. Because of course he does.

Because he's the damn Batman.

So. I read this and I think, yeah...this is the way to do it. This is my vision of Batman. This is my Batman. A guy who knows the deadliest, most recondite of mystic martial arts, but rarely if ever uses them...and still takes the time to fix an old lady's sink. That's how I think the Batman should be. That's my Batman.