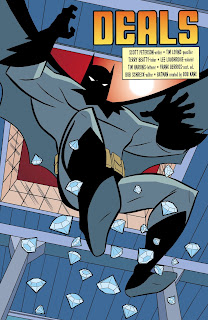 I love Scans-Daily. Long before legal digital reprints were easily accessible (or even available), Scans-Daily was where I'd go to find a story I remembered fondly (or couldn't quite remember very clearly). Even now, I find them not just an invaluable resource, but just plain swell.

It doesn't hurt when they like the stuff you write, of course. Such as, for instance, Gotham Adventures #30.

(Don't get me wrong—I know what they're really responding to is the wonderful art by the great Tim Levins. And who can blame 'em?)

Here's what I wrote:

PAGE FIFTEEN
Panel One
Batman and Clayface stand with Mister and Mrs. McKee and a doctor--let’s make this doctor female and either African-American or Asian, whichever you feel like, Tim. She wears a coat that clearly shows she’s a doctor, but perhaps the STAR Labs logo can be on there, to differentiate her from the Fort Kisco docs?
DOCTOR: ...and since the floor temperature can be dropped in a matter of seconds, Clayface can be frozen into immobility at any time.
BATMAN: I don’t think we need to worry about another escape attempt.

Panel Two
Batman’s opening the door that leads into another room. Clayface is looking sullen..
CLAYFACE: Great. So you can keep me here, but you can’t force me to do whatever it is you want.
BATMAN: Why don’t you explain that to Tommy?

Panel Three
Closeup on Clayface, his face going slack upon seeing Tommy.
CLAYFACE: Who’s Tommy and why do I...
CLAYFACE: Oh.

Panel Four
Twoshot of Clayface and Tommy. Tommy’s ten and due to a genetic problem, he looks very much like a smaller, paler version of Clayface, only worse--his molecular structure is breaking down, causing him, in effect, to melt. The two of them look at each with a touch of horror and lot of recognition and resulting sadness.

Here, impossibly, is what Tim delivered: 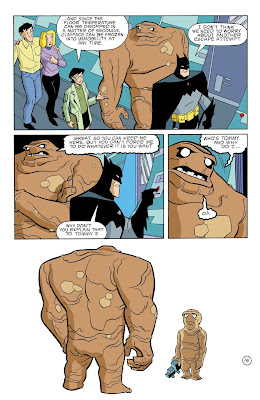 How heartbreaking is that last panel? How crazy spot on is the expression Tim gave poor Tommy? I swear, I've seen this page dozens of times and it never doesn't get to me. The pathos is insanely powerful.

Somehow, Tim then surpassed that on the subsequent pages—here's what I wrote:

PAGE SEVENTEEN
Panel One
Clayface holds out his right arm and pushes up his sleeve with the other. We can see that from the wrist up to the elbow it’s goopy and Clayface-looking. Tommy looks on.

Panel Four
Tommy lets his arm and the rest of his body drop, very disappointed: this seemed to be his last hope, and now it’s gone too. Clayface looks quite sad.


PAGE EIGHTEEN
Panel One
Clayface grabs Tommy’s arm and holds it with his arm, which is now goopy again. Clayface smiles reassuringly.

Panel Two
They both concentrate like hell, Clayface playing it up for all it’s worth.

Panel Four
Pull back for them both looking down at Tommy’s arm which is now the arm of any ol’ ten year old. Tommy looks like he was just told he’s taking batting practice with Ken Griffey Jr, while Clayface’s pleasure is a little more muted if just as deep; he’s purty durn stoked here. 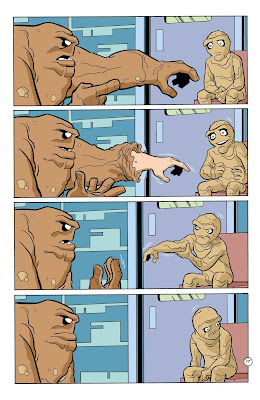 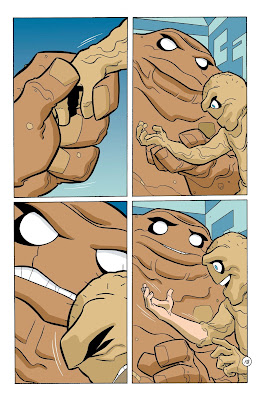 I love how Tim used the exact same size and shape panels on each of these two pages, then changed them up—all widescreen on the first page and then switching to all vertical on the second. So great.

To his chagrin, time after time, Tim showed me that I could write anything—from ridiculously overcomplicated shot descriptions to pages where I'd just say "I have no idea what should happen here, Tim--help!" and I'd get back exactly what I wanted only ever so much more so. In other words, I'm pretty sure this sequence was a metaphor for our artistic relationship.
Posted on Friday, April 24, 2020