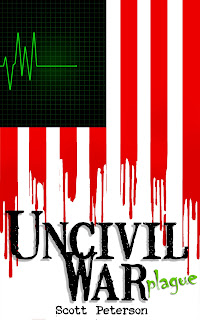 And so here we are again.
Way back when Uncivil War began, I had so many ideas for so many future volumes. And as time went on, I only ever got more and more ideas. But real life also intruded, and I found myself crushed under various deadlines—not the worst fate in the world for a freelancer, but also not the most conducive situation for one wishing to continue to self-publish. Something had to give and to my great frustration, it was Uncivil War.
And then 2016 happened. And to the surprise of probably no one in this country, on either side of the political divide, writing a new volume of Uncivil War was about the last thing I could possibly imagine doing. Suddenly it all became too much—too real. Far too real.
And then election day was rapidly approaching and somehow I found myself kneedeep in Uncivil War once again. I wrote what looks to be the longest volume yet, a series of vignettes of varying sizes and set in various locations around our country…and then suddenly I realized I was back on the island with a pair of old friends (and at least one new one) and this volume was demanding my full and unfettered attention. And before I knew I was at least waist-deep—and perhaps more like neck-deep—and then this volume was finished.
And then it sat. And sat. And sat. As the election was over and yet, obviously, things were unsettled. As was I. To the point where I wasn’t able to even open the finished, copyedited document since three weeks after the election—it was, again, all too much.
So here we are, now, two days before the inauguration and I’m well aware that from a sales point of view it would have made so much more sense to get this out in the market months ago, or at least weeks ago, and yet it just wasn’t something I was able to get done. But over the past few days I’ve found myself thinking about Uncivil War again and again, even as I have deadlines breathing down my neck yet again.
And so. Here we are again. At long last, here is the third volume of Uncivil War: Plague.
Posted on Thursday, January 21, 2021